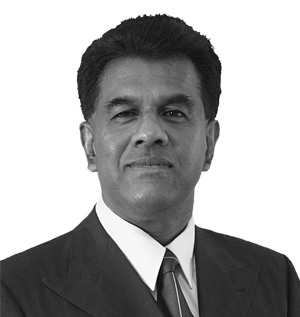 Llavan Fernando is the CEO of Zone24x7 Inc. and its Sri Lankan subsidiary Zone24x7 (pvt) Ltd which he co-founded with his wife Saw-Chin Fernando. Prior to starting Zone24x7 back in 2003, he was the founder of Mobinetix, which today is a wholly owned subsidiary of Zebra Technologies – Sri Lanka’s first Silicon Valley based IT company.
Llavan Fernando was born in the town of Pannipitiya in Sri Lanka on the 30th of May 1952 to teacher parents. He studied at De Mazenod College in Kandana up to his G.C.E Ordinary Level examinations. His family then relocated to England where Llavan completed his G.C.E Advanced Level examinations at the John Ruskin Grammar School in South Croydon, London. He subsequently attended the University of Reading where he obtained a Bachelor’s Degree in Electrical Engineering and a Master’s Degree in Instrumentation and Systems. It is at the University of Reading where Llavan developed his keen fascination upon electronics.

Llavan Fernando started his career as a Research and Development Engineer at H. Tinsley & Company in England. After Tinsley, he moved on to Gravenor company which was pioneering Aircraft Fire Protection.

Llavan eventually relocated to the United States where he met Professor John Linville who at the time was the Head of Integrated Engineering Studies at Stanford University. Llavan later joined Telesensory systems – a company founded by Professor Linville together with Dr. James Bliss of Massachusetts Institute of Technology. At Telesensory Systems, Llavan obtained his first patent and he aided the development of the Eight Dot Braille System.

In 1996 Llavan joined the company @POS as Vice President of Engineering where he became the Chief Technology Officer in 1998. In December 2000 he moved on to become the CEO of @POS. @POS was later acquired by Symbol Technologies.

In 2003 Llavan Fernando started Zone24x7 Inc. with its headquarters in San Jose, California and in 2004 Zone24x7 (pvt) Ltd. as a seperate entity in his native Sri Lanka where he started developing technology solutions for some of the world’s foremost organizations including the Fortune 500.